One of the reasons that we are coffee lovers is that that coffee is such an interesting drink. There’s not only just one way to make it, it doesn’t only just have one taste, and it’s not only made from just one specific coffee bean.

While most coffee is made from normal coffee beans, there is a very special type of coffee called Peaberry Coffee. If you’ve been reading up on coffee beans you might have heard about Peaberries. Well, this is the key ingredient of Peaberry coffee, and in this article we will explore this rare, yet popular, type of coffee.

What is Peaberry Coffee?

Peaberry coffee is often called the “champagne” of coffee, and it is a rare and very popular type of coffee. It is made from Peaberry beans which are sweeter than normal coffee beans. Peaberry coffee is therefore a sweeter coffee compared to regular coffee.

What is a Peaberry Bean?

To fully understand what a Peaberry bean is, we need to explore where and how normal coffee beans are produced.

Coffee beans are harvested from the fruit of the Coffea plant. The two most popular Coffea plants are Coffea Arabica and Coffea Canephora. These plants are grown in an area called the Bean Belt between the tropics of cancer and capricorn.

The fruit of the coffee plant, or often referred to as a coffee cherry, turns bright red or pink when ripe. A coffee cherry normally has two seeds inside. We refer to these seeds as coffee beans, and while they are not true beans in the sense of the word, we call them beans due to their bean-like appearance.

But in certain cases, you will only find one coffee bean inside of the coffee cherry instead of the normal two seeds. This is a natural mutation and not caused by any chemical treatments. These seeds are called Peaberry Coffee Beans or Peaberries.

Finding a Peaberry coffee bean inside a coffee cherry is quite a rare occurrence. Between 5 – 10% of a coffee crop contains this very special type of coffee bean.

A Peaberry is different than a regular coffee bean in more ways than one. Let’s explore two differences.

Firstly, they differ in shape. A Peaberry has two round sides whereas regular coffee beans have one flat side and one round side. Peaberries have two round sides because they don’t share the coffee cherry with other beans.

Secondly, Peaberries are much sweeter than normal coffee beans. They receive all the nutrients from the coffee cherry rather than sharing it with another bean.

What is the Best Peaberry Coffee?

At Beans About Coffee, we are fanatical about Koa Coffee. In the case of Peaberry Coffee, we are particularly fond of their Peaberry Medium Roast Whole Bean 100% Kona coffee. That was quite a mouth full 😉

This specific coffee has a full-bodied and smooth taste, and because it is Peaberry coffee, it has a sweet flavor. In addition to this, it is Kona coffee which means it is very high quality. 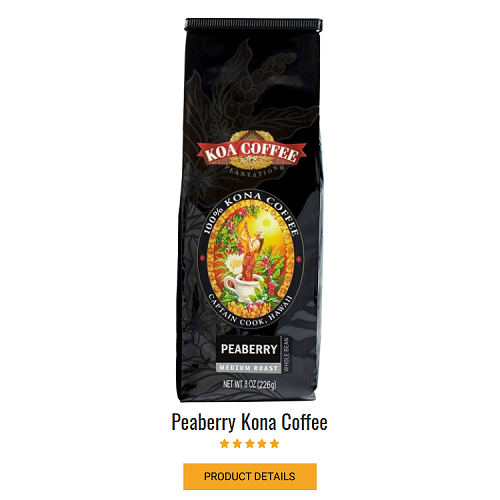 If you’re unfamiliar with Kona coffee, let’s explore it a little bit.

Kona Coffee is considered to be of very high quality and a very popular choice among many.

Yes, Peaberry Coffee is rather expensive. You see, during the sorting process, Peaberry beans are handpicked from the crop to separate them from the regular beans. This obviously takes more time and effort, which contributes to high prices. Only up to 10% of a coffee crop consists of Peaberries, so you can imagine how laborious this process can be.

How does Peaberry Coffee Taste?

Due to the sweeter Peaberry beans, coffee made from these berries has a sweeter taste than regular coffee. Some claim that Peaberry coffee has a lighter and more refined taste, but this depends on who you ask as many coffee lovers are divided on this matter.

Does Peaberry Coffee have more Caffeine?

Due to the rarity of Peaberry coffee, not enough research exists on the caffeine levels in Peaberries. Early research does show though that certain Peaberry coffees do indeed contain higher levels of caffeine. Take this information with a grain of salt though, as we stated before, further research needs to be done in order to establish the exact, or generally accepted, amount of caffeine in this type of coffee.

Yes, Peaberry coffee is healthy as it carries all the health benefits normally associated with coffee. But that doesn’t mean that you should consume large amounts of it on a daily basis. Due to its caffeine content, you should limit your intake to 5 cups per day.

If you keep consumption within the recommended limits, you can benefit from the positive effects it has on the human body:

Be careful not to consume Peaberry coffee or any other type of caffeinated coffee, in large amounts per day. This can lead to unwanted side-effects that are not good for the human body.

Well, this is a very subjective matter. We all like our coffee to taste a certain way. Imagine how boring it would have been if we all liked the same type of coffee?

Peaberry coffee has certain qualities that set it apart from other types of coffee. Yes, it is rare and more expensive, but that doesn’t mean that it is a better coffee. Some coffee connoisseurs even claim that Peaberry coffee tastes the same as normal coffee.

It all comes down to what YOU prefer. If you don’t like coffee with a sweet flavor then it won’t be the best coffee for you. If you would like to expand your coffee horizons, then why not give it a try?

If you’ve never had Peaberry coffee before, we urge you to give it a try. If you like coffee with a sweet flavor then it will be an amazing alternative to your regular coffee. If you’re a keen explorer of different coffees, then Peaberry coffee should be on your coffee bucket list.

There’s a good chance that you won’t find it at your local coffee shop or supermarket, but you can order it online here.

Hey, I’m Joe. I’m a web developer, photographer, and most importantly, a coffee lover. Join me as I explore the wonderful world of coffee.